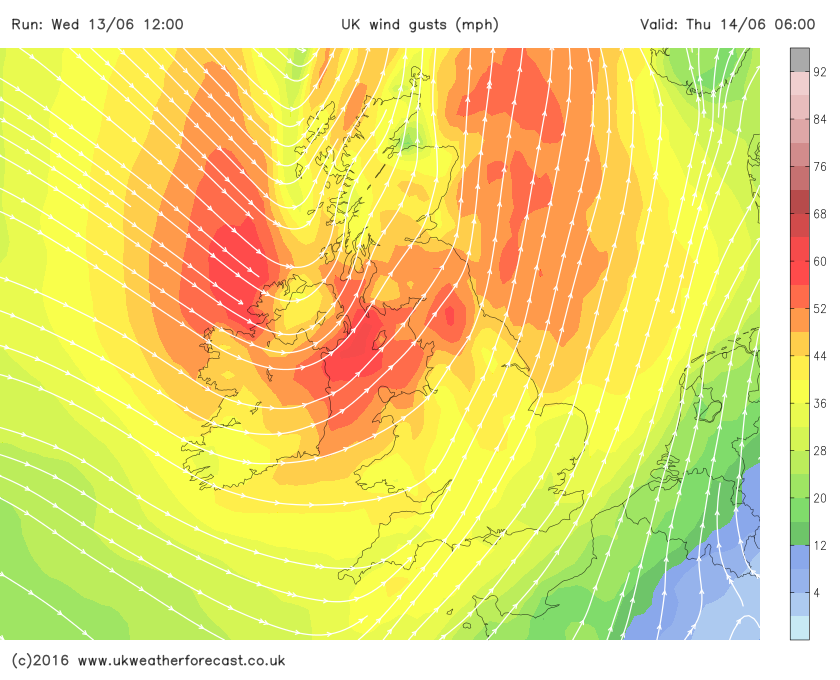 
Storm Hector moves in overnight and he’s expected to bring some unseasonably disruptive weather across northern parts of the United Kingdom.

A frontal system associated with the area of low pressure is currently affecting western and northern parts of the United Kingdom and will continue to push eastwards overnight.

The heaviest and most persistent rainfall will be west of the Pennines and across West & northwest Scotland. Precipitation (rain) will be patchier in nature on the southern extent of the frontal system.

Showers, heavy at times will also rattle in behind the frontal system to affect Northern Ireland, Scotland, northern and northwestern parts of England and western coasts in general during tomorrow.

The main emphasis on storm hectors potential disruption is the strong winds. Initially Atlantic coasts of Northern Ireland and Ireland will see winds strengthen to 50-60mph with locally wind gusts in excess of 65mph.

The strong winds then transfer eastwards during the overnight period to affect Northern most Irish Sea locations, western, northwest and southwest Scotland with gusts peaking at 60-65mph, we may see 70mph + from storm Hector locally.

During tomorrow morning the strong winds on Hectors southern flank will continue to move east/southeastwards, eventually affecting northern, northwestern and the far northeast of England. The strongest winds across England are expected across Irish Sea coasts and central parts of Northern England with gusts in excess of 55-60mph for a time.

Whilst there is a risk of heavy showers during the early hours of Thursday morning across western areas, many parts of the country, especially eastern and southeastern areas will be wondering what all the fuss is about with temperatures tomorrow ranging from 18-20c, although it will be a tad breezy!