Register today for accurate weather or click here to login

Is a cold blast with snow on the way? – The Latest

For the last 10 days or so we’ve been mentioning the risk of much colder weather developing around the 10th of December. The models have been toying with the idea, with some of the output showing very cold and snowy weather, yet other model outputs have showed milder Atlantic driven weather. 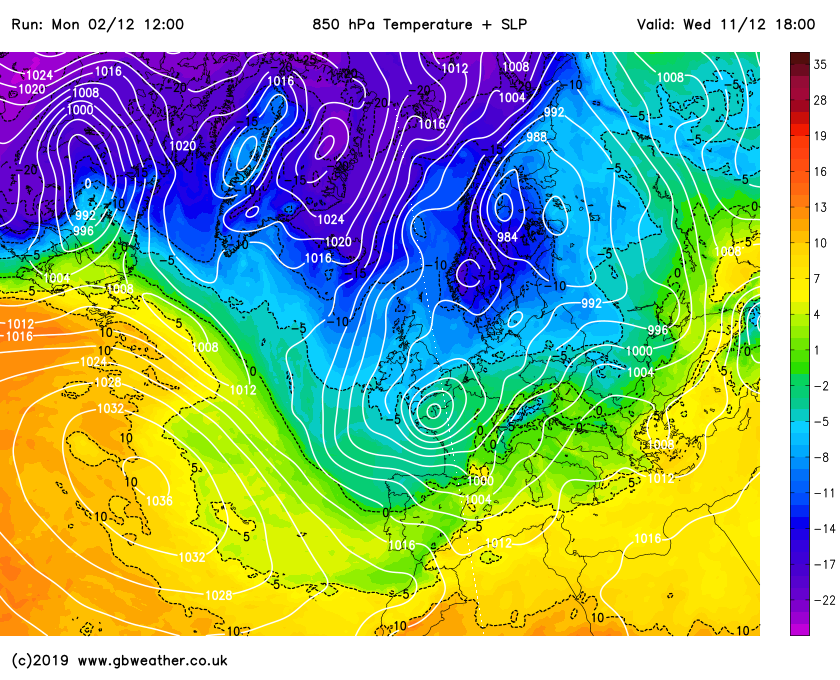 The chopping and changing between the models have sent forecasters on a wild goose chase it would seem, however we’re now starting to see better agreement and support from various models which point towards some colder weather developing. Now we’re not talking about massive amounts of snow and bitterly cold temperatures at this range, at the moment we’re more than likely to see much colder weather developing with a risk of overnight widespread frosts and snow showers across many northern and perhaps eastern areas at times.

The model outputs vary with some showing a brief northerly flow with others showing a full on north to northeasterly blast with the cold air sticking around for a while, we’re still firming up on the exacts but I must admit the output is looking promising if you like cold weather or snow, rather than mild and wet weather. Below is what the fuss is about from this afternoons latest model output, sending many weather forums, groups and websites into meltdown. It shows colder air moving down from the north with a surface low perhaps bringing some snow to southern areas for a time before colder air and snow showers pack in behind on a biting northerly wind.

Further down the line, into FI (fantasy island) the models show a Feb 1991 event with the Atlantic running up against very cold air across the United Kingdom leading to a major snowfall event. Still a long way to go yet but it is looking colder at least with the risk of a major cold weather event below 40%< at the moment. I’ll keep you updated as always via the Facebook page or if you love the weather you can have access to me pretty much 24/7 by signing up to my pro service and joining the pro Facebook group were you’ll get the best weather updates there is! Click here to signup.